Your Browsers Needs a Update

Following on from the Germinal Reseeding Demo day held on the farm of Brian and Pat Hogan on the 7th of August, in conjunction with Teagasc, we caught up with Brian this week to have a look at the new reseed and see how well it has established.

Top5 Extend was the mixture sown on the day of the demonstration, at a rate of 14 kg per acre, which contains AberGain, AberChoice and Drumbo, along with white clover. As seen from the image above, taken on the 1st of October, both the sward and clover have established well after 8 weeks.

Prior to sowing, 2 tonne of lime was applied per acre. Following sowing, Brian applied 3 bags of 10:10:20 and the field was rolled well with a heavy roller; something which Brian believes has really helped with the establishment of the sward. A bag of Sulpha CAN was applied approximately 3 weeks later. Brian used Legumex DB as a clover safe post emergence spray about 5 weeks after sowing, which has worked very well. A bag of protected urea was applied on the 8th of September as Brian was blanket spreading the farm, and the first grazing took place around the 20th of September.

Most of the field was disced, followed by the one-pass. One strip of the field was sown with the Erth Seeder to compare between the two methods of reseeding. In the images below, we have documented the establishment in a selection of side-by-side images over the past 8 weeks. 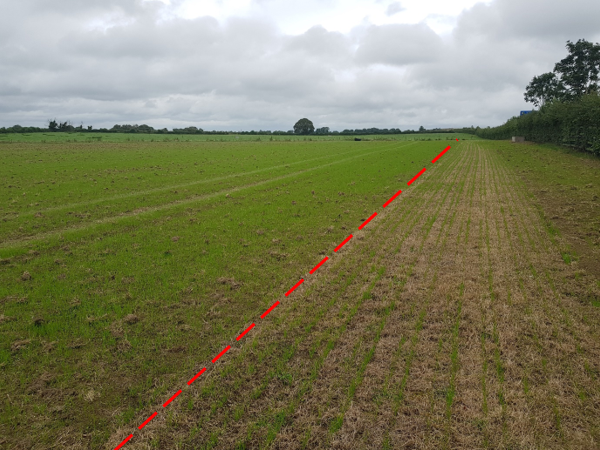 In this image, the area sown by the Erth Seeder (direct drilled) is clearly visible. There appears to be a better take in the area sown after the disc and one-pass, however it is clear that there is a very even establishment of the plants sown by the Erth Seeder. There are no misses and all plants are present, however the space between the drills makes it appear like a poorer take. Brian felt the early establishment of the grass was similar between the two methods of sowing. 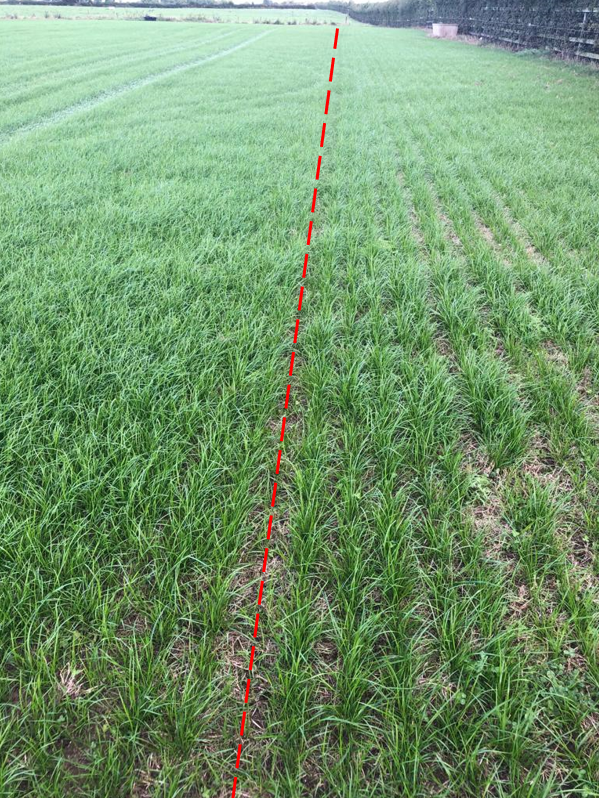 It is clear that there is a more even spread of plants in the area that was disced and one-passed. All of the area sown by the Erth Seeder is establishing well but the rows between drills are very obvious, and this is simply a factor of the drill. Overall, there is an excellent take of the sward at 5 weeks post-sown. Also, noticeable in this image is the establishment of clover and how clean the sward is. Both methods have established very well. 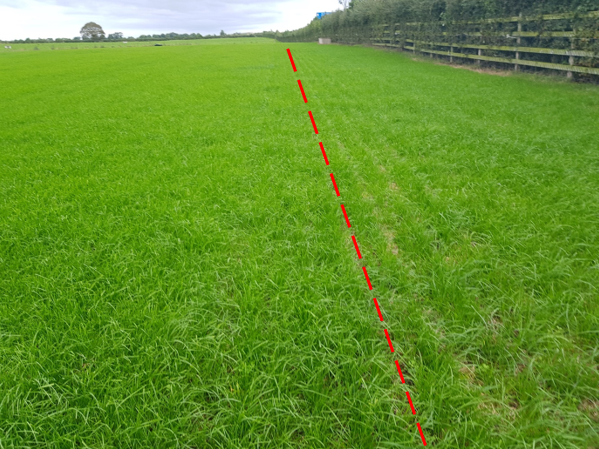 At this point, the field has been grazed once; approximately 12 days ago. The drills sown by the Erth Seeder are still visible but with grazing has helped the grass to tiller out and fill in any gaps. In general, the distribution of the seed using the one-pass has resulted in a greater spread of plants and a thicker looking sward overall, but come next spring, a visible difference between these swards will be hard to see.

Brian has been monitoring the two sowing methods closely since the sowing date, and while reporting there was no difference between them in terms of establishment and growth, weeds appeared later in the drilled sward (Erth Seeder). Brian attributed this in the drilled sward to no till of the soil, compared to the disced ground. As most of the field was disced with only a single width drilled, Brian believes his application of the post-emergence spray, although timed perfectly for the ground that was disced, was a bit early for the ground that was drilled. As most fields are sown entirely by one method or the other, this would generally not be an issue on-farm.

Developments will ensure Germinal can enhance service to farmers to help them maximise the...
We are pleased to announce that we’ve strengthened our technical sales team with the...
Ashleigh Fennell grew up on the family farm in Co. Carlow where sheep and suckler farming were...
Any thoughts of reseeding in 2021 are most likely to be down the priority list at this time of...
View all
We use cookies to ensure that we give you the best experience on our website. If you continue to use this site we will assume that you are happy with it.OkPrivacy policy