Red clover seed can produce a high-quality, cost-effective source of homegrown protein, with the capacity to reduce the reliance on bought-in feed. It has the potential to fix 150-200 kg N/ha, releasing it to other plants and reducing the need for nitrogen fertiliser.

A short-lived perennial herbage legume, red clover typically persists for three to four years. It is very different to white clover with an upright growth habit and a strong deep tap root.

It grows from the crown at the base of the stem, where it stores nutrients for the plant. Avoiding damage to the crown is important to ensure crop persistency.

Red clover seed can be grown as a monoculture but is more commonly sown with perennial or hybrid ryegrass to produce high yields of protein-rich forage for conservation.

Red clover grows from the crown located above the ground. Careful management is required to avoid damaging this part of the plant and to protect the crop’s longevity. Its strong, deep taproot acts as a nutrient pump, making it more suitable for deep, fertile soils. 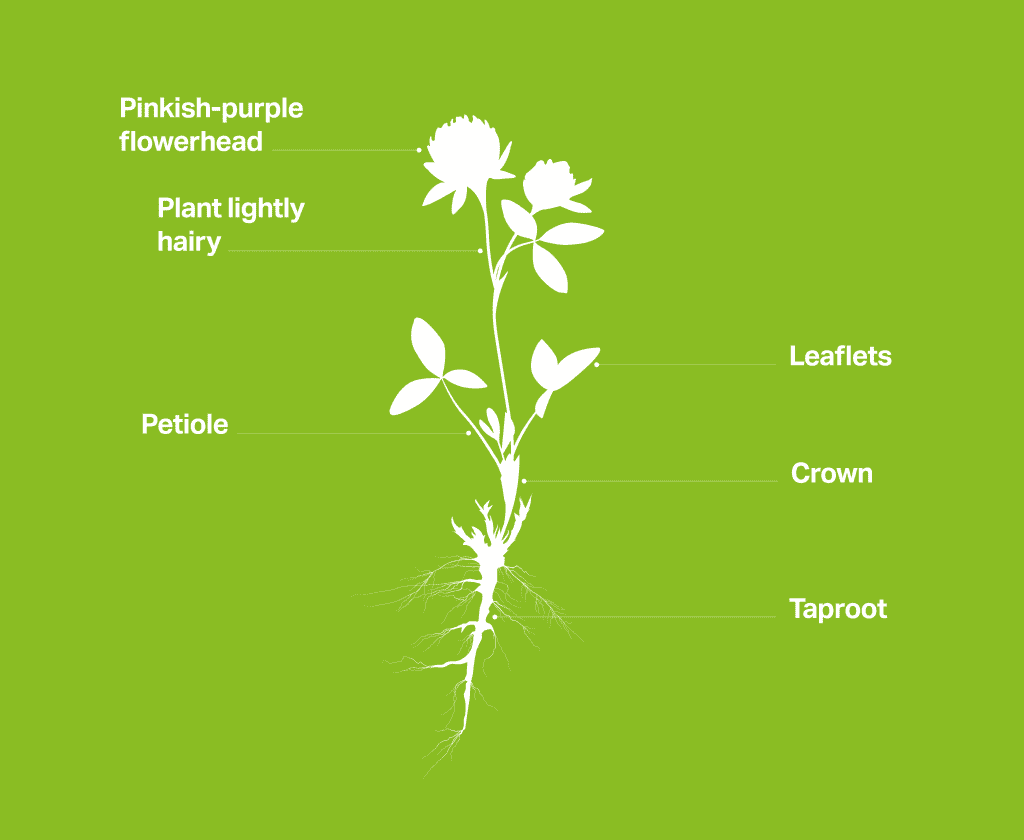 The finer roots have nodules containing Rhizobia bacteria. These bacteria have a mutually beneficial (symbiotic) relationship with the plant. Clover provides food and shelter for the bacteria, which in turn convert atmospheric N to usable nitrate in the soil.

Red clover has little winter growth but tolerates the winter cold and has good drought resistance. It is generally expected to have a lifespan of three to four years in the sward, depending on management.

Modern varieties such as AberClaret are also more tolerant of grazing making them suitable for use in rotational grazing systems.

AberClaret can persist for four to five years under cutting, producing over 14.6 t DM/ha in year four. It is also significantly more tolerant of grazing by dairy cattle.

Red clover is best sown as part of a full reseed from April to late July in well-drained, fertile soils. It is most often sown as a mixture with ryegrass. Oversowing is not recommended.

Stem eelworm is the major pest of red clover, first seen as patches of crop with poor growth and stunted plants. Clover rot (Sclerotinia) is the most serious disease affecting red clover, typically seen in the winter.

The clover leaves become peppered with brown spots and generalised rot of the crown, leaves and stems. Pests and diseases can also be spread between fields by infected plant material or soil on machinery.

A red clover silage mixture containing 73% intermediate organic perennial ryegrasses and 27% red clover seed. Before sowing this mixture, organic farmers will have to apply for derogation.

Part of Germinal’s research and innovation team, Germinal Horizon, is based at the world-renowned Institute of Biological, Environmental and Rural Sciences (IBERS) in Aberystwyth. The main objectives of the team’s current red clover breeding programme are:

1. Maximising yield and increasing persistency, maintaining yields into the fourth year and beyond

Long term trial plots are showing fourth-year data for new varieties producing up to 14 t DM/ha. Over the four years, the new material is totalling around 60 t DM/ha compared with 40-45 t DM/ha from the controls.

2. Greater resistance to pests and diseases, particularly of Sclerotinia and eelworm

Several breeding lines with improved resistance have been identified and these, along with resistant wild ecotypes collected from around Europe and Asia, are being used to develop new varieties of red clover.

Nitrate pollution is a longstanding issue of water quality and there is awareness of the need to improve efficient utilisation and retention of plant-available forms of nitrogen.

This includes improving nitrogen uptake from the soil (reduced leaching) and reducing nitrogen losses in the silo (increased retention through increased PPO activity).

A proportion of the protein content of red clover is lost through oxidation under silage. In suboptimal conditions, this can be as high as 30% of the overall content, with the nitrogen content of the degraded protein being lost through leaching. Similarly, a large proportion of plant proteins are degraded in the rumen, resulting in its loss before digestion by the grazing animal.

The enzyme PPO plays a role in protecting protein from this degradation. Enhancing PPO levels helps the retention of protein through silage and digestion, maximising the nutritional qualities of the forage and preventing loss of nitrogen to the environment. PPO also protects plant membrane lipids during silage and in the rumen, improving the fatty acid profile of milk produced by cows fed red clover by increasing polyunsaturated fatty acids and decreasing saturated fats.

5. Improving tolerance of grazing and trampling by selecting for strong crowns to allow greater flexibility in use (eg. aftermath grazing)

Our Knowledge Hub is a resource of guides, topical discussion pieces and recent features for you to refer to and utilise for best practice.